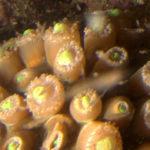 Corals are the most important structural units in the formation of these marine ecosystems; Tiny architects living in colonies that permanently build an external skeleton for their protection, thus giving rise to these oases of the tropical areas of the planet, in which about 25 percent of the known marine species inhabit.

Corals are marine animals that reproduce mainly sexually. The reproduction of the most important species for the reef, is given through the release of eggs and sperm to the sea to be fertilized. Once these eggs have been fertilized, coral embryos are formed, then larvae.

These larvae move through the sea, carried by the currents, to settle on the substrate of their choice; Thus they enter as new colonies. Of the millions of eggs produced by these corals, less than 2 percent achieve settlement and of this 2 percent an even smaller fraction will survive to be an adult and enter the reproductive stage.

This release of gametes from reef-forming species, known as coral spawning is a magical act of synchronization, in which sponges, starfish, fish, among other species of the reef are also reproduced.

Between 6 and 7 days after the full moon of September this expected reproduction occurs, the time depends on the species of coral that spawns, this year we will have a second reproduction in the month of October, the 20th and 21st of this month, we can also marvel at the magical work of nature.